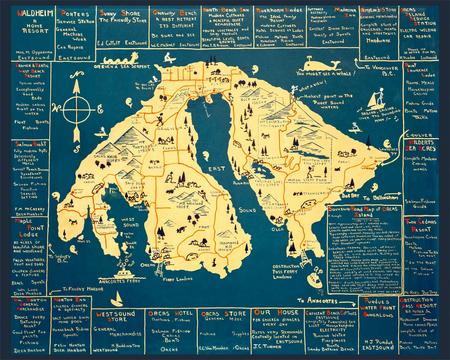 How do you get to Orcas Island?  How did the early explorers find their way before they even knew what was there to be found? Our new exhibition “Mapping Orcas: The Way Home” features an extraordinary collection of maps, most of which were assembled, restored, and reproduced by photographer Peter C. Fisher of Orcas Island.  Also featured in the museum are exquisite, hand drawn, original maps by the late Jean Putnam.

Maps include the township section map (1888-1895) by J.J.Gilbert, a variety of geological and navigational charts, and a number of maps especially created for the “edification” of tourists and amusement of locals. Also exhibited is a reproduction of a really old map, edited by three explorers in the 18th century, that certainly verifies Juan de Fuca’s 16th century description of the islands he saw on his voyage to the Northwestern part of the largely unknown continent. Two mid-nineteenth century maps by John Wilkes and his expedition show great leaps in accuracy of surveying and navigational methods.

Historical surveying and navigational tools lent by islanders provide support to the maps—and help the viewer to understand how we found our way before Google Earth and GPS were everyday realities in the 21st Century.

Fisher’s beautifully restored maps are available to purchase as reproductions, including sections of the extraordinary Gilbert map, which reveals much about how the land was cultivated and used during the homestead era. A portion of the proceeds will benefit the museum.

A separate cabin in the museum is dedicated to the late Jean Putnam’s hand-drawn, one-of-a-kind watercolor and ink maps of Orcas and the greater San Juan/Channel Islands archipelago that were created for individual clients.