Crow Valley School, originally called Pleasant Valley, was built in 1888, one year before the Territory of Washington was admitted to the Union as the State of Washington. It was built on an acre of land donated by settler Peter Frechette. Students from grades one through eight were taught in the school house, which had a capacity of 57 (though most years saw about 27 students in attendance.) In 1893 there were 63 days of school compared with a State minimum of 180 today. 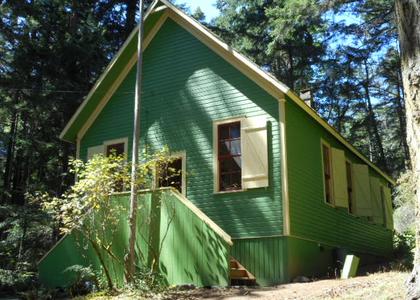 The length of school terms was dependent on funds and the availability of teachers, who were paid about $50 per month. Some teachers would move from one school district to another, and sometimes their pupils would follow. Irene Bellvue recalls following her teacher to three different schools, one on another island.

Crow Valley School was closed in 1918, after which students attended the consolidated Eastsound School. The building continued to be used as a community meeting place, including use as a church and a Sunday School. In 1929 the school house was purchased by “The Willing Workers” women’s club, many of whom were former students, and became The Crow Valley Club. This club made a few changes to the school house, including an opening to the main room which served as their kitchenette. Using a kerosene stove they held community dinners and entertained in this space.

In 1987 the school house was placed on the National Register of Historic Places. Shortly later it was painstakingly restored over hundreds of hours by Richard Schneider and Bud McBride, the founders of Crow Valley Pottery.

Crow Valley School is one of the finest examples of an intact one room school house in our state and in 1989 was recognized for its renovation during the Washington Centennial Celebration by the Governor’s wife Jean Gardner and Secretary of State Ralph Munro, both co-chairs of the Centennial Committee. Richard Schneider and Bud McBride received the State Historic Preservation Officer’s 1997 Annual Award “For Outstanding Achievement in Stewardship for the Crow Valley School.”